Sign up for the Bodie Blue Books newsletter and find out the latest from authors Janet Dawson and D. Z. Church! 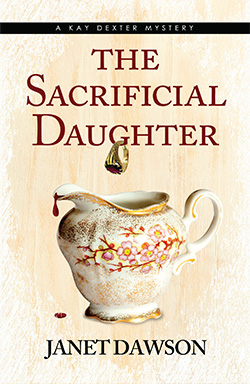 One of Kings River Life‘s favorite books of 2021!
“This award-winning author has crafted a new series that immediately draws in readers with its original premise and an extraordinary heroine.”
—Cynthia Chow, Kings River Life

A family at war, and Kay Dexter is caught in the crossfire.

Geriatric care manager Kay Dexter is savvy, fierce and determined as she protects and advocates for elderly clients. Kay left the big city to care for her parents in their small mountain town, so she knows from experience that eldercare is hard on families.

Betty Garvin needs Kay, especially when her daughters battle over Betty’s care. Kay tries to mediate the dispute, and finds herself on the front lines. Is there more to the conflict than the sisters’ concern for their mother’s health? Does Betty’s valuable estate come into play?

When the two daughters go to war, someone winds up dead. And Kay could be collateral damage.

Praise for The Sacrificial Daughter:

“In this suspenseful novel, Janet Dawson tackles one of the most serious problems facing us today: how to provide for an increasing population of aging citizens.  Well-researched, with engaging characters and vivid settings, this is another winner for Dawson.”
—Marcia Muller, author of the Sharon McCone series and Grandmaster, Mystery Writers of America

“Kay Dexter helps her clients navigate the changes and challenges that come with growing older—issues that can lead to discord in even the best of families. Can lead, in fact, to murder. Award-winning author Janet Dawson has crafted a fine tale of the high price one family pays for its greed, lies, and misplaced loyalties. The Sacrificial Daughter is a satisfying first entry in a promising new cozy mystery series, and Kay Dexter is a heroine you’ll want to have on your side.”
—Margaret Lucke, author of the Jess Randolph series and the Claire Scanlan Haunted House mystery series

Death Above the Line