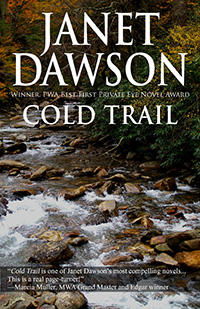 Jeri Howard’s brother, Brian, has been missing for four days before she is notified. The trail is getting colder as the anxious PI searches for Brian across Sonoma County for clues to explain why he disappeared. She’d thought Brian’s life was in great shape. But her investigation uncovers cracks in his marriage and problems with his job. To complicate matters, there’s a body on a boat along with Brian’s MedicAlert bracelet, and two police detectives who think Brian is involved in the homicide. Meanwhile, the clock keeps ticking…

“Cold Trail is one of Janet Dawson’s most compelling novels featuring private investigator Jeri Howard—a fast-paced search in which Jeri has a very personal stake. This is a real page-turner!”
—Marcia Muller, MWA Grand Master and Edgar winner

“Exciting… This may be the toughest case in Jeri’s career. Dawson keeps the suspense high as Jeri seeks to find her brother before it’s too late.”
—Publishers Weekly

“Cold Trail brings Northern California’s wine country so alive you’ll want to pack up and move there… Dawson knows how to blend real history and real crime into an intriguing mystery about a missing man and the people, and the land, he loves.”
—Betty Webb, Mystery Scene

“The eleventh of the series continues to thrill by helping set the standard for female private investigators. The California setting comes alive as well: Dawson has perfected the private detective procedural mystery, and watching Jeri methodically track down her brother using her intelligence and information she receives is a true delight. Chapters from the viewpoint of a victim only increase the reader’s sense of danger, and the conclusion ties the narratives together ingeniously. This is a strongly plotted mystery and is sure to satisfy longtime fans of both Jeri Howard and her always-dependable author.”
—Cynthia Chow, Kings River Life

“There is a great deal of underlying tension and suspense in Cold Trail as Jeri searches for her brother… The pacing of the narrative is relentless as Jeri, together with the reader, fears the worst. With sharply drawn characters and vivid settings, this solidly plotted mystery is a strong entry in this series.”
—Mysterious Reviews

“An intriguing, modern, and very believable mystery… the book is intelligent, articulate, and engaging.”
—Over My Dead Body

I felt cold, and it wasn’t only because of the morgue’s temperature. The pathologist, a middle-aged woman in green scrubs, walked to the oversized stainless steel refrigerator and opened the door. She pulled out the drawer that held a covered body.

“You know there was a fire,” the pathologist said, by way of warning.

I nodded, glancing at Griffin and Harris. They were detectives with the Sonoma County Sheriff’s Office Coroner Unit. They’d met me here on this sunny Tuesday in August and they had prepared me for the condition of the corpse I was about to view.

“The body was burned,” the pathologist said. “That’s why we weren’t able to get fingerprints. But the damage is mostly to the lower part, the legs, the hands and forearms. The head and chest are… Well, you’ll see.”

The pathologist reached for the sheet that covered the body. My hands tightened into fists. I shoved them into my pockets. I breathed in the scents of formaldehyde and decay as the pathologist uncovered the dead man’s head and torso. I stared at the face, willing myself to move past emotion and examine what was there.

The dead man had thick brown hair that fell past his ears. The ends looked singed. So did his eyebrows and eyelashes. His eyes were open and staring, a pale blue. His mouth was open too, his teeth exposed in a disturbing rictus. The teeth were stained by tobacco. His skin had been reddened by the fire, but I could make out a faint crescent-shaped scar on the man’s lower left jaw. His earlobes were long and fleshy, and they’d been pierced.

He hadn’t died in the fire, though. He’d been shot. The bullet had entered his chest near the heart.

I let out the breath I’d been holding. I shook my head.

I nodded, relief and disquiet washing over me, as I concentrated on cataloging what I’d seen and what I knew. “You told me this man is six feet tall and a hundred eighty pounds. That matches my brother’s description. But the hair is too long, and too dark.” I raised a hand to my own short auburn hair. “Brian’s hair is like mine, a bit lighter. And it’s thinning on top. His eyes are blue, but darker. He doesn’t have a scar on his chin. Or pierced ears.” I gestured at the dead man’s open-mouthed grin. “Brian has a crown on the upper left side of his mouth, and his two upper middle teeth are slightly larger than the others. This guy’s teeth are more even. And they’re stained. That tells me this guy was a smoker.”

I looked at the pathologist. She nodded. “Definitely a smoker,” she said. “The victim doesn’t have any crowns. Just fillings. He’s missing a tooth on the upper right, way at the back.”

Griffin nodded and exchanged glances with Harris. “Thank you, Doctor. Thanks for coming in, Ms. Howard.”

The pathologist covered the body and returned the corpse to its resting place in the refrigerator. The detectives and I headed for the door.

Outside in the corridor, I turned to them. Harris was the taller of the two men, with a broad coffee-colored face and big shoulders inside the jacket of his blue suit. He looked older, too, in his forties. Griffin was my height, about five feet eight inches, and appeared to be in his late thirties, with a wiry, athletic build under his gray suit. He had short blond hair over a tanned face, looking as though he spent a lot of time outdoors.

I reined in my emotions as best I could. “May I see the bracelet again?”

Griffin took the evidence bag from his pocket and handed it to me. I held it up in the bright fluorescent light, examining the bracelet inside the clear plastic bag.

The bracelet was made of brushed stainless steel, with a rectangular plate and a stretch band, like a watch. It had come through the fire with a layer of soot, and I saw a bit of burned fabric caught in one of the links. There were also scratches on the links where the bracelet band had broken, as though the bracelet had caught on something stronger than it was, metal probably. The link must have separated as the bracelet was pulled away. It looked as though some of the links were missing.

The front of the plate was engraved with the medic-alert symbol, a serpent-entwined rod as wielded by the Greek god Asclepius, a deity associated with healing and medicine. Next to this was the name  BRIAN. The back of the plate was also engraved, with a name—Brian Howard—and information noting my brother’s penicillin allergy. Below this was the identification number that led the detectives to the MedicAlert Foundation and ultimately to Brian’s family.

I willed the inanimate object to tell me where my brother was. But it didn’t. I handed the bag to Griffin.

“It’s Brian’s bracelet, all right. Where did you find it?”

“On the floor inside the boat’s cabin, near the corpse.” Griffin put the evidence bag back into his pocket. “We think maybe it was in the victim’s pocket.”

“When did this happen? And where?”

“Early Sunday morning,” Harris said. “Newman’s Marina near Lakeville. The boat was tied up at a dock there. There was an explosion and a fire, probably due to a propane leak somewhere in the boat’s cabin, according to the Lakeville Volunteer Fire Department. After they got the fire out, they found the body and called us. We figured it for an accident until the pathologist did the autopsy. Now it’s murder.”

“To the best of my knowledge,” I said, “my brother didn’t know anything about boats. He’s not a sailor. I can’t imagine why he’d be at a marina on Saturday night.”

“You can’t think of any reason why your brother’s MedicAlert bracelet would turn up at a homicide?” Griffin’s expression was bland.

The detectives exchanged looks. “In the meantime,” Harris said, “our body’s still unidentified. We’re back to square one.”