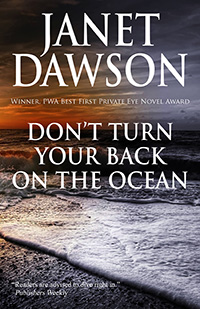 Jeri takes a much-needed vacation and goes to Monterey to visit her mother, Marie, and a host of other relatives. Some vacation. Things go downhill rapidly in Don’t Turn Your Back On The Ocean. Some sicko is mutilating pelicans, and a saboteur plays nasty tricks at Marie’s restaurant, and Jeri’s cousin Bobby is suspected of murdering his girlfriend.

On land, the brown pelican looked big and ungainly. This one perched on a fence near the end of the Coast Guard jetty, a bundle of gray-brown feathers dwarfed by its huge dark bill and the loose dark brown throat pouch beneath. The pelican stared at me with one round unblinking eye, set high in its white-feathered head, then spread its powerful wings and took flight. I marveled at the bird’s unexpected grace as it glided with military precision between the turquoise water of Monterey Bay and the clear blue September sky.

Suddenly the pelican altered course and plunged some twenty feet into the water, breaking the smooth glassy surface. I counted the seconds until the bird emerged from the water, a silvery fish wriggling in its beak. The bird straightened its S-shaped neck and swallowed its prey.

“We’ve got some sicko at it again,” Donna Doyle said, joining me near the fence. “Just like back in 1984 and 1987. The creep catches the pelicans, cuts off their beaks or slashes their pouches. Or both. Then he releases them. Pelicans can’t fish without their beaks, so the birds starve to death.”

I shuddered at the image, chilled despite the warm late-September sun. I turned to look at my cousin. As a private investigator, I’m well aware that there are a great many evil people loose in the world. Quite often they treat their fellow human beings the way they treat animals.

“Who’s involved in the investigation this time?” I asked.

“We are, of course.” In this case, we meant the California Department of Fish and Game. My cousin is a biologist who studies and monitors sea birds, specifically the brown pelican, a 30-million-year-old species which is on the endangered list. Blame DDT and a host of other pollutants.

Donna grasped the mesh of the chain-link fence separating us and other human observers from the rocks that formed the breakwater at the end of the jetty. Dozens of California sea lions sprawled unconcernedly in the early-afternoon sun, their companions an assortment of sea gulls, cormorants, and pelicans.

“Also the Monterey County SPCA and the National Marine Fisheries Service, since pelicans are protected. But I thought maybe you could help.”

“Me?” I stared at my cousin. She was three years older than me, thirty-six, and a few inches shorter than my own five feet eight inches. Her round fair face was full of freckles, splashed across a snub nose. “What makes you think a private investigator from Oakland can help?”

“The outside observer,” Donna said. She ran a hand through her short unruly blond hair. “Another pair of eyes that might see something we’ve missed. These incidents are similar to the earlier ones, but there are some differences, too. Think about it. I have to talk to someone.”

Earlier I’d wondered why my cousin had asked me to meet her here. Now she walked toward the inward side of the jetty, where the vessels of Coast Guard Group Monterey were tied up. Donna went through the gate and boarded the gleaming white cutter. I took a seat on the low concrete wall on the bay side of the jetty, just to the right of two elderly men who’d cast fishing lines into the blue water.

I heard sea lions barking in the distance, beyond the end of the jetty. The creatures congregated under Commercial Wharf Two, farther to the east, where the fishing boats unloaded their day’s catch. Fisherman’s Wharf was closer, several hundred yards distant. The wharf jutted over the water, buildings and planks balanced on a forest of thick pilings pounded into the bay floor. A number of small boats rode the water in between, at anchor, a picturesque sight for the customers of the restaurants whose broad glass windows sparkled in the afternoon sun.

I shifted, tucking my blue-jean-clad knees under my chin, and gazed out at Monterey Bay, a marvelous sight on this clear autumn day. As the bay curved to the east toward the coastal hills it was edged by the smooth sand of Del Monte Beach and the mounded dunes along Highway 1, where huge breakers rolled foaming onto the beach. Further north, past the Salinas River and Castroville, the self-proclaimed artichoke capitol of the world, I saw the tower of the Pacific Gas & Electric generating plant at Moss Landing. Beyond that, distance and haze made the shoreline and the coastal hills indistinct as they circled north, then west, past Watsonville, Capitola and Santa Cruz.

The blue-green water glittered like a jewel, dotted here and there with white foam and froth, moving with tide and current, waves and backwash from the boats that rode its surface. The bay was alive with fish and sleek black sea otters, barking sea lions and harbor seals, white sea gulls, brown pelicans, the darker cormorants. Beneath the water’s surface kelp drifted gently, hiding place for octopus, squid and rays, schools of fish and thousands of tiny sea creatures, all depending on one another for survival.

The first whale I ever saw was in Monterey Bay. I was five years old, walking hand-in-hand with my grandfather on the bluff overlooking the rocky shore at Lovers’ Point. Suddenly Grandpa pointed at the water. My eyes followed the direction of his hand and I saw a whale breach, close to shore. The creature’s enormous gray bulk lifted impossibly high, majestic in slow motion. Then it returned to the mother ocean with a mighty splash as I stood openmouthed, awed, entranced, clinging to Grandpa’s hand.

“Well, that was a dead-end.” Donna tapped me on the shoulder and brought me to the present. “I thought one of the Coasties had a lead, but it didn’t pan out. Did you think about what I said?”

“No,” I admitted. I’d been drowsing in the sun, and Donna’s mutilated pelicans had been far from my mind. “I’m on vacation. I’m here to loll about on Mother’s deck, with a can of beer and a paperback, soaking up the sun. A week’s respite from personal injury cases and digging information out of tax records at the assessor’s office. Even private investigators take vacations.”

Not very often, though. I was the sole owner and investigator of J. Howard Investigations. If I took time off, J. Howard didn’t get paid. It was different from my five years as an operative for the Errol Seville Agency. Back then I had health and dental insurance provided by the company. But Errol had retired to Carmel eighteen months ago, sidelined by health and age, so I set out on my own.

My cousin tilted her head to one side, a challenge in her blue eyes. “Come on, Jeri, you know you can’t resist a puzzle. Meet me this afternoon at the SPCA and talk to my friend Marsha. She’s their investigator.”