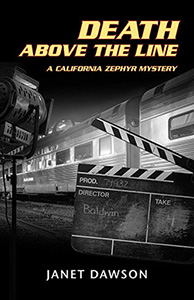 Jill McLeod walked into the railcar’s lounge. In front of her, a man and a woman sat with their backs to the window. They leaned toward each other, heads almost close enough to touch. It looked as though they shared whispered secrets. The waiter at the bar poured a drink. At another table, a bulky, silver-haired man with a mustache watched the couple, a sneer on his face.

Then a middle-aged man wearing the cap and uniform of a Western Pacific Railroad conductor rounded the corner. He stumbled and fell. His cap went flying as he sprawled at Jill’s feet.

The man scrambled to his feet, muttering, “Damn, damn, damn.”

Jill McLeod retrieved the cap and handed it to the man in the conductor’s uniform. “Are you all right, Mr. Gallagher?”

“Nothing hurt but my dignity.” He flashed a smile, laugh lines crinkling around his eyes. Then he set the cap on his head and brushed dust from his uniform.

“What happened?” the director asked, frowning.

Bert Gallagher shrugged. “Sorry, Drake. I took that corner too fast. I’ll get it right on the next take.”

“Okay.” The director turned and conferred with the assistant director, the cinematographer and the cameraman. Outside the circle of light, the rest of the crew faded into shadows.

“We’ve had three takes already.” The seated woman sounded annoyed. She leaned back and stretched her hands above her head, moving her back and shoulders in her figure-hugging jade-green dress. Her short platinum hair and pale porcelain complexion contrasted with her carmine lipstick and nail polish. The movie was being shot in black-and-white film, but the cameraman had told Jill that the fabric’s texture and the makeup’s sheen would come through on the screen.

The handsome, dark-haired man sitting beside the woman shrugged. “It’s okay. We’ll get the next one.”

“I do hope it doesn’t take us all afternoon.” The silver-haired man reached up and stroked his mustache, as he often did.

The actor behind the bar, playing the waiter, didn’t say anything, but his expression was equal parts annoyance and resignation.

Jill had never thought, not in a million years, that she would be working on a movie set. At first she figured it might be fun. But she had been here a week now and she had a new appreciation of what happened before the finished product finally appeared on the big screen. Making movies seemed to happen in fits and starts. The actors and crew did the same thing over and over again until the scene was polished to the director’s satisfaction. And usually that involved multiple takes.

The set was supposed to be a California Zephyr dome-lounge car. It was as though one side had been peeled away to reveal the interior of the railcar—the enclosed vestibule at the front, then the café, then steps leading down to the lounge. The real appearance did not, however, extend to the Vista-Dome. In a real car, that would have been above the lounge. Instead, the curved stairs ended at a platform.

The set looked authentic enough. But it wasn’t quite the same. The car didn’t move or have the right sound. Jill was accustomed to the sway of a moving train and the rhythmic clickety-clack of wheels on the rails. The sound and light effects would be added later. She herself was the one touch of authenticity on the make-believe railcar. Jill was a real Zephyrette, a hostess on the sleek silver streamliners that made daily runs between Oakland and Chicago. Now she was playing a Zephyrette in this movie. In addition to her lines in the script, she was learning a new language, one that included terms like gaffer, grip, call sheet, and best boy.

The blue uniform she wore had been created by a costume designer. Ordinarily, Jill would not have worn such a thick layer of makeup. It was hot under the relentlessly bright Klieg lights that illuminated the set. She felt a trickle of sweat in her short brown hair and hoped that she wasn’t melting her makeup.

Drake Baldwin, the director, called, “Okay, one more time. Let’s get it right.”

The actors took their places. The stars—Leona Alexander and Neal Preston—leaned their heads together as though deep in conversation. Charles Bosworth, who played the villain, gave his mustache one last stroke and resumed his menacing expression. Jill and the ersatz conductor stood off-camera, waiting for the cue to walk into the lounge, as the boom operator adjusted the position of his microphone. The clapperboard, with its chalked scene and take numbers, slammed down as the cameras began to roll.

Jill walked into the lounge. The actor playing the waiter looked up from the drink he was pouring and spoke his dialogue, calling her by her character’s name. “Hello, Miss Casey.”

She smiled in return as the blond actress, playing a character named Dolores Bain, beckoned to Jill. “Oh, Miss. When do we get to the next station?”

Jill looked at her wristwatch, much as she would in a real situation, and glanced up at the actress. “We should be there in an hour, Miss Bain.”

“Thanks.” The actress leaned back. Then, with a sidelong glance, she addressed the dark-haired actor next to her. “We can send a wire there. If that’s what you really want to do.”

The actress laughed. “You don’t trust me, do you?”

Before he could answer, Bert Gallagher rounded the corner, all brisk efficiency as the conductor. “Miss Casey, there you are. We need you and your first-aid kit in the first chair car.”

“I’ll be right there.” Jill turned and left the lounge, taking a left turn as though heading for the Zephyrette’s compartment, where the first-aid kit would be kept. Once she was out of the scene, she breathed a sigh of relief. Behind her, the dialogue continued, with the actress saying, “If you don’t trust me, how will we ever strike a bargain?”

“I’m not sure you’re the kind of woman I want to bargain with,” he said.

“Cut! Great. That’s good. Now, let’s set up for the next shot.” The director gathered the actors around him as he told them how he wanted it to go. “Leona, you’re walking in the passageway, coming from the sleeper cars. You hear Neal and Charles arguing in the lounge, and then you walk in. Charles, you’re standing over Neal. You’re menacing him, trying to intimidate him and push him into a corner. But Neal, you’ve got his number. You’re not giving an inch.” Then the director turned. “Jill, for this shot, you’ve been up in the Vista-Dome. Then you come down the stairs. You stop and say hello to Billy in the bar.”

Billy, who was playing the waiter, nodded. Jill climbed the curved steps that led to the platform and waited for her cue.

The assistant director, a woman named Eve Stillman who always dressed casually in slacks and shirts, touched Drake’s arm to get his attention. “Before we get started, what do you think about doing an over-the-shoulder shot here—” Her voice trailed off as she gestured with both hands, illustrating what she had in mind.

A makeshift office had been set up in a corner of the warehouse, near the back door. An old office chair with arms and wheels was pulled up to a rectangular table made of scarred and stained wood. The table held a black telephone, an unshaded metal lamp and a solid gray Remington typewriter, as well as an assortment of file folders and a pint jar full of pencils. This was where Eve Stillman performed one of her many assistant director duties, typing out the call sheets that governed the day’s shooting. The call sheets told actors and crew members what time they were expected on the set and what scenes would be shot.

Half a dozen chairs were clustered around a small black-and-white television set on a metal stand. The TV had been turned off just a couple of hours ago. Today was October 1, and the second game of the World Series had ended with a New York Yankees victory, much to the chagrin of the Brooklyn Dodgers fans among the group. So far the Yankees were two for two.

Now the phone rang, pealing over and over. “Somebody get that,” Drake snapped. “And then take it off the hook before we start shooting again.”

The production assistant, a young man with a harried expression, loped toward the table. He picked up the jangling phone in mid-ring and held the receiver to his ear, speaking in a low voice to whoever was on the other end. Then he set the phone on the table and walked back to the set.

Drake was nodding, his hands up, framing a view of the lounge. “I like the idea, Eve. Let’s do it from this angle. Okay, places, everyone. Let’s get cracking on this.”

The production assistant, who had been hovering near one of the movable lights, tapped him on the shoulder. “You’re wanted on the phone. The studio.”

The director’s voice sharpened, irritated at the interruption. “Not now. I’m busy. Tell whoever it is that I’ll call back.”

Silence greeted his words, but the looks on the faces of the cast and crew spoke volumes. A shadow passed over Neal Preston’s handsome face. Leona Alexander’s full red mouth compressed into a tight-lipped frown. Eve Stillman sighed and stuck her hands in the pockets of her khaki slacks.

“Damn,” Drake said finally. “Okay, take five, everyone, while I get this call.” He left the group, threading his way through the equipment to the table where the phone sat.

Jill, perched on the platform at the top of the curved stairs, surveyed the faces below her.

Who was this Mr. Felton? And why did the mention of his name cause such alarm?