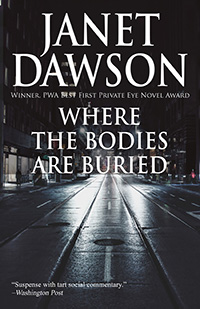 Do you know Where The Bodies Are Buried? Jeri is about to find out. Her client was murdered before he could tell her why he needed a private investigator. Jeri thinks the answer is at the company where he worked. So she polishes up her word processing skill, borrows a suit and goes undercover as a secretary.

“Janet Dawson writes a terrific story that is riveting from the first page.”
—About.com Mysteries

The phone rang at one in the morning. At least that’s what the faintly glowing red digits on my clock radio said.

As the phone jangled, I struggled from the tangled embrace of sheets, dislodging my cat Abigail, who was curled up at the hollow of my back. As I groped for the switch on the bedside lamp, my other cat, Black Bart, jumped to the floor, as though to escape the hullabaloo. I picked up the telephone receiver, mercifully cutting the racket in mid-peal.

Before I had time to croak out a greeting, I heard my ex-husband’s voice. “You got a client named Rob Lawter?”

“And good morning to you, too.” I squinted at the clock readout and said what generally comes to mind in a situation such as this. “Do you know what time it is?”

“Never mind what time it is,” Sid growled. “Rob Lawter, male Caucasian, twenty-nine, brown hair, brown eyes. He lived in a fifth floor apartment in a building on Alice Street.”

I picked up on the past tense right away. You notice words like that, particularly when they’re used by a homicide detective.

“Was a client. He’s dead. He took a header out his living room window a couple of hours ago. Your business card was in his wallet.”