A few years ago I was in the lobby of the elegant old Hotel Colorado in Glenwood Springs, looking at photographs of notables who had stayed there, including President Theodore Roosevelt—and Al Capone.

Yes, Al used to vacation in the Colorado Rockies, along with a lot of other gangsters.

Most people who grew up in the Denver area, as I did, have heard of Colorado’s own crime family, the Smaldones. The three brothers—Clyde (“Flip Flop”), Eugene (“Checkers”) and Clarence (“Chauncey”)—dominated organized crime in the Mile High City for years, starting in the 1930s, following the death of Denver gang boss Joey Roma, who died in a hail of bullets fired into his Denver home. 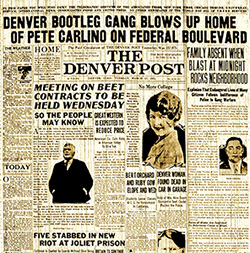 There was also organized crime in southern Colorado, in the Front Range city of Pueblo, and farther south in Walsenburg and Trinidad. Italian immigrants who came to work in the state’s coal fields brought with them the Mafia and the Black Hand. In Pueblo, the Danna brothers and the Carlinos fought it out over who would control bootlegging in their part of Colorado.

As I wrote Death Deals a Hand, I thought it would be interesting to give one of my California Zephyr passengers a shadowy past. So the character of Victor Fontana was born.

If you want to read more about Colorado’s history of organized crime, here are a couple of books I recommend:

Mountain Mafia: Organized Crime in the Rockies, Betty L. Alt and Sandra K. Wells, Dog Ear Publishing, 2008. A look at the Black Hand and the Mafia in Colorado, including the Smaldones and their predecessors and rivals, through the twentieth century, and the Colorado crime syndicates’ links to organized crime in other areas of the United States.

You can also watch a YouTube video about this book:

Smaldone: The Untold Story of an American Crime Family, Dick Kreck, Fulcrum Publishing Company, 2009. A history of Denver’s own crime syndicate, active from the 1930s to the later twentieth century.