Death Above the Line, the fourth California Zephyr mystery, finds my Zephyrette protagonist Jill McLeod no longer aboard a moving train, the scene of crimes in the earlier books. For this one, she’s making a movie, a film noir, in Niles, California.

Jill certainly saw Sudden Fear. She also saw The Narrow Margin, another 1952 release, with Charles McGraw and Marie Windsor. It’s a crackling good yarn that makes good use of its train setting.

Why Niles, California? It has a movie history.

Niles is nestled up against the East Bay Hills near the entrance to Niles Canyon, carved by Alameda Creek, which meanders through the hills and empties into San Francisco Bay at the Coyote Hills Regional Park. It used to be a separate town, but now it’s the Niles district of Fremont, the East Bay city incorporated in 1956, with Niles added to four other small communities: Centerville, Irvington, Warm Springs and Mission San José. 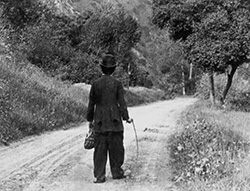 As for movies, Niles is the site of the Essanay Studios, the western branch of a Chicago studio formed by George Spoor (the S) and Gilbert Anderson (the A). Anderson was known as Broncho Billy Anderson, and in addition to the role of studio co-owner, he was an actor, director and writer. Because of Chicago’s weather, Broncho Billy went west. Essanay made movies in Colorado first, then went on to California, with locations ranging from San Rafael to Santa Barbara. Essanay-West opened in Niles in 1912 and Niles Canyon was used as a location for many of its movies, including Charlie Chaplin’s The Tramp.

The Niles branch of Essanay shut down in February 1916, but the ghosts of Essanay linger in Niles. There’s the Niles Essanay Silent Film Museum, with its annual Broncho Billy Silent Film festival. And just off the downtown main drag are the Essanay houses, bungalows built to house studio personnel, still standing but recognizable because of their architecture.

Niles Canyon is an important link in the Transcontinental Railroad. The small town was an important stop for both the Western Pacific and Southern Pacific Railroads. It was certainly a stop for the old California Zephyr, the first that the eastbound train would reach after leaving the Oakland Mole near the waterfront, and the last on the westbound route. The trains would stop only if there were passengers waiting to board, or get off the CZ.

There’s still a train going through the canyon. The Pacific Locomotive Association operates the Niles Canyon Railway, which is the only railroad that runs on the original and best preserved alignment of the Transcontinental Railroad. If you like to ride trains and live in the Bay Area, check it out. The trains run round trip between Niles, on the west end of the canyon, and Sunol, at the east end. February-March and September-October, it’s the first and third Sunday, while April through August, it’s every Sunday. Check out the website for schedules and costs. And there are special excursion trains, everything from beer and wine tastings to afternoon teas and school excursions.

The big event every year, however, is the Train of Lights. Volunteers bring out the holiday decorations and deck the halls, in this case the railroad’s vintage cars. Nighttime round trips between Niles and Sunol show off the lights. And I do mean lights. Last December, on an evening flight, I looked out the aircraft window and down—and saw the Train of Lights sparkling below me as it wound its way through Niles Canyon.

The Train of Lights has all sorts of seats, from coach to an open gondola, to a dome car like the ones on the old California Zephyr. My favorite is the parlor car, where volunteers dressed in holiday finery dispense cookies, coffee and hot cider, the beverages with or without booze, your choice. And one of these days, I want to rent the whole caboose. Who’s with me??!!

Be forewarned, however. The Train of Lights is extremely popular. The tickets go on sale in October and they sell out FAST.